The Lawyers Professional Responsibilty Board is filled with partisan hacks ... oh, wait

KSTP reports that the fellow whose quote is to your right about me being a partisan hack (from this 2006 post) has run afoul of ethics charges.

The Office of Lawyers Professional Responsibility alleges Ellenbecker didn't return an audiotape to a client. It also accuses him of failing to pay a private investigator even after ordered to do so by a court.

The petition also says Ellenbecker hasn't cooperated with the office, which is an agency of the Minnesota Supreme Court that handles complaints against lawyers.

Ellenbecker uncooperative? Incroyable! I'm sure there's a good explanation for this.

The Board is in fact appointed by the Minnesota Supreme Court and has 23 members.

UPDATE: Larry Schumacher gets a call from Ellenbecker, who says it's a "misunderstanding" that he made worse through "procrastination". �I screwed up, but I didn�t do anything intentionally in terms of trying to avoid anybody,� he said Thursday. The story is generating a great deal of commentary on the Times' chat, where the former mayor is a frequent poster.

Who did Roosh pay? I smell a foot 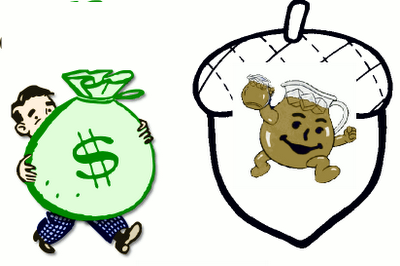 Controversy surrounds the Roosh campaign, as every time there is a move up in the Martin numbers, a sudden increase of fifty votes for Roosh occurs. Try it. Vote for Martin, and see what happens.

Could there be an influx of new voters? Where did they come from? There seemed to be some signaling last night from the stage of Trocadero's during the Patriot Debate when Roosh supporter Mitch Berg kept saying "tip your waitresses." Was in fact those tips an ACORNish attempt to buy votes from the waitstaff?

Curiouser and curiouser. I demand an investigation. I smell a Dieboldical plot. (Yes, I made that word up. That will teach you not to vote for me!) How do we REALLY know that the count is accurate? For that matter, how do we know that KAR actually won Lord Jones' Pitcher? Were their witnesses for the counting of the ballots or comparison of the scorecards?

I call on all MOBsters to seek transparency and truth in the voting for MOB Mayor.

UPDATE: The sham investigation by the KAR, offered by someone who doesn't know his acorn from a hole in the voter registration system ground, is rejected. MOB members should post on their own blogs calls to impanel an inquest by the former MOB mayors.

As your mayor for a few more days, I have only one function left. I am asking all MOB Members in Good Standing to vote for Margaret Martin for Mayor.

As a longtime MOB member, only Margaret has the knowledge of MOB politics that we need. She clearly can handle unruly members, given her experience with her husband. Given the University of Michigan football team, she has the time. And it's time, once and for all, to break through the glass ceiling that has so far prevented women from reaching the mayor's office.

Roosh has engaged in a shadowy campaign, hiding with known libertarian turncoat Mitch Berg, trying to ride the Obama coattails, and closing his own blog. Should a blogger that disowns his own past be rewarded with the highest office in the Minnesota blogosphere? Forsooth!

So hie thee to the KARtacular, and Vote Martin!

It depends on what your motives are

The problem with Foot's post is that he assumes my desire to be Mayor of the MOB was still present. In the email I sent him, all I did was to assure that Margaret had indeed met the rules and tried to roll something, anything. Thus I intentionally did not play a strategy that was meant to win, only to assure that she had played, meaning she wants the job.

It has been an honor to serve as your mayor. Alas, it has not been fruitful in the creation of parties for MOB, and as such I do not consider my term in office to have lived up to my expectations or yours. I am flattered to have had as much support as was provided to me (thanks for your twenty votes, Bobo.)

Heavy has rested the seal, and as major changes may be coming in the near future anyway, the process may as well begin by ceding that seal to new, better candidates. Applescowsky didn't get it, so mission accomplished there.

An endorsement of the two finalists will come tomorrow. Bribes Letters of supplication should arrive by noon, MM and Roosh. FedEx closes at 5.

Return your mayor to office

Voting has begun for the office of mayor of the MOB. �I humbly seek your support and ask you to vote by finding the sidebar at the Kool Aid Report.

Who do you think I am? Mark Olson?

In response to the repeated calls for a signal of my intentions, I am announcing that I will seek a second term as Mayor of the MOB. In these troubled times, you need a steady hand and a light touch, and there has been no lighter touch or steadier hand in the MOB than mine.

Behold the power of dog

We are enjoying an early lead in the runoff for Mayor of the MOB. The power of dog has been upon us, and no sense breaking this streak. Debbie writes in comments: "I don't give a hoot who is mayor of whatever this organizaion is, but the posts of Buttercup won me over. " Buttercup humbly beseeches your vote. 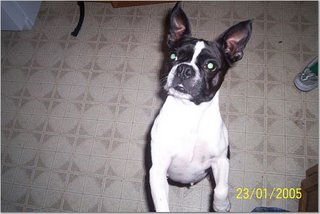 It is a long and distinguished line of mayors before me, and I hope to be able to carry on their examples. Congratulations to Atomizer on a well-fought campaign; as a Twins fan I'm sure he'll appreciate the specialness of making the playoffs. On behalf of Buttercup and the entire Scholar family, thank you for your support. A full Buttercup pictorial will be forthcoming shortly, as soon as Littlest assembles it. A new and improved, multi-city MOB Road Show will be forthcoming.