I was listening to David Strom Show yesterday and he and Margaret were talking about the Olympics. He reminded us that Canada has 20 million people and yet manages to pull off a pretty nice event and win a world record of gold medals. The USA won the most medals (of all types) by a single country in a single Olympic games.

Canada is quite justifiably proud. But I was intrigued -- is it true that adjusted for population the Canadians had pulled off quite a feat? The population of Canada is actually closer to 33 million, for one thing (I was doing the math in my head and 20 million just felt small, so I went to look it up.) There are other countries in the medal table that are smaller. What if we adjusted medals for population? 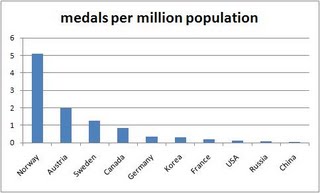 Norway has a population of about 4.5 million (2009 levels), or less than 14% of Canada's. And yet it manages to win 23 medals compared to Canada's 26. Doesn't that count for something? China has a huge population, so that competition for the Olympic team is likely to be very strong. The US has a high per capita GDP. These smaller countries of Europe, however, with small populations, do very well. I tried the same graphs with just gold medals or with GDP rather than population, and you get approximately the same results. Also note I just looked at the top ten countries in the medals table. If you go down further you may find a small country that won one or two medals and would finish on this list.

BTW, that gold medal record the Canadians broke? It was shared between Russia and ... Norway. Matthew Futterman shows that even using historical models, Norway did very well this year.

(And if this post does not get a link from noted NARN Norgephile Mitch Berg, he has seen his last cigar.)

UPDATE: Prof. David Wall of the Geography Dept. here at SCSU sends along this graphic too: 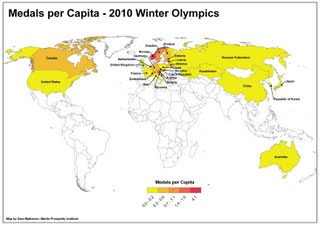 A map of medals since the beginning of the Winter Olympics is similar.