In a sense, a record 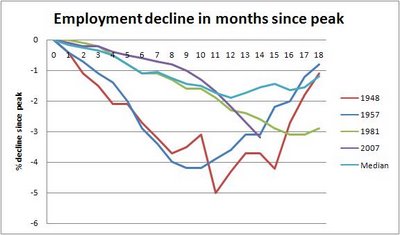 This graph, of which I've been doing a local version for about a year, has a new story to tell. Last summer I thought it said the recession was wimpy. It's not any more. The data is from the Minneapolis Fed, which has a really nice tool to create one of these graphs and data to download if you want more control (as I did.) "Median" is the median value of the 10 previous recessions. "Record" in the sense that we now have a postwar record almost; I've always viewed the 1948 recession as an abnormality created by demobilization from WW2. I'm not sure why I think that. I downloaded a paper on that recession, written before the 1957 recession, to read over the weekend. Maybe I'll write about this again, as I think this ties to some of the conclusions in Amity Shlaes work on the Great Depression and some of her interviews lately where she's talked about the postwar recovery.

I'll be on the David Strom Show tomorrow at 10am CT on the Patriot (in addition to my usual NARN turn at 3pm); since they always have me the first Saturday of the month, it's almost always the case that the employment numbers are the first thing we discuss. So keep this graph handy; I'll discuss it then.