If it be recession, it be wimpy 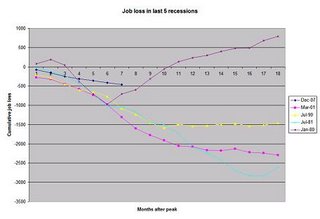 These lines measure cumulative job loss from the peak of each recession, assuming that the current recession -- if it is one -- began on December 2007. (I started saying in late January that if there was one, December was a pretty good guess for the peak.) We're now at the end of month eight of the recession, and these typically last ten. The only one that got a positive bounce was the January 1980 peak, and since that one was followed by another peak in just 18 months, I don't suppose that's the one you want to follow.

Let's put it another way: On average, at seven months cumulative job loss for the last four recessions is 1,034,500 jobs; for this one, it's 463,000. There is no more than 500,000 more jobs on average lost in those last four recessions, most of which happens in the next four months. So we may have a recession in which cumulative job loss ends up around 0.5% of payroll employment. And then there'll be data revisions; very possibly they'll end up making that number larger, but suppose they find additional jobs in unmeasured areas?