More thoughts on the Paulson, McCain and Obama plans

Nothing better to do while sitting in a dry faculty senate meeting...

I'd like to thank the discussants of the post I made yesterday for plain speaking, and I'd like a chance to respond to requests therein. I'd also like an opportunity to comment on the McCain and Obama plans as well as the Paulson (or Paulson-Bernanke) plan. (McCain and Obama links are from Friday, but I have seen nothing on either page to indicate deviation from these, though both are carping on the Paulson plan.) I am going to hold off on the reply to the discussants that don't come in this post for tomorrow, since it's already late in the day and this post got long without answering those questions. The question of "what went wrong", in my opinion, can be answered at leisure.

First off, let's dispense with the idea that the Paulson plan is a "$700 billion bailout." It isn't. We are borrowing $700 billion from world markets at the rates the U.S. government gets, to buy mortgage-backed securities from banks that want to sell them. We would hold them for some time, during which we pay interest on that $700 billion, and then we sell the MBSs when we believe we can fetch a good price. It's conceivable we could earn a profit on this, though I won't even bet my lunch money on that eventuality. But we won't get zero for those loans. Recall that when the savings and loan crisis broke we read estimates as high as $500 billion to bail out all the failed thrifts (with assets over $500 billion.) The total cost, estimated by FDIC in 2000, was $152.9 billion. In the case of RTC, the money bought actual houses that had to be sold, something more expensive than moving MBS paper. They got about $.70 on the dollar. I was in Indonesia in 2000 when a bailout of the Jakarta real estate market had put trillions of rupiah of foreclosed commercial real estate in the hands of their trust operators. As badly handled as that one was, they still got more than $.22 on the dollar. So the cost will not be $700 billion (or 5% of GDP.) It will be substantially less than that.

Second, the proposals do not involve a free lunch for the banks. It appears Sen. Dodd has put forward a proposal that requires a dollar of equity from any bank that gives a dollar of its assets to the feds. Such a payment was part of the McCain proposal as well, in seeking warrants from those who come forward for assistance. As Prof. Litvin indicates, these proposals involve dilution of shareholder equity therefore, and thus are the haircut that one would think shareholders would take. Some bloodletting, then, though not enough to kill the patient. It appears Paulson is willing to agree.

That said, one issue that has arisen in both the Obama plan and in the plans that some senators want to push is that somehow we should not pay more than the mortgages are worth, or should assure that taxpayers are not at risk.

A key point of the critics was that under the plan Treasury must pay more than the market value for the mortgage assets.

Banks have been paralyzed by this fire-sale price because their precious capital would evaporate overnight.

The key to the plan, Bernanke said, was that if Treasury was able to buy the mortgages, it will be able to hold them to maturity. As a result, the fire-sale price could be avoided.

This would remove uncertainty, return liquidity, and credit markets should be able to unfreeze, Bernanke said.

I had drawn a graph about this last year, which I reproduce now. 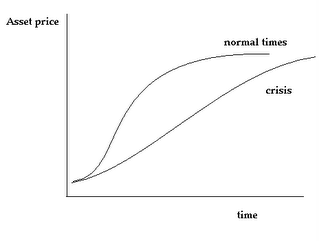 The high price shows the path of a hold-to-maturity price (the top price shown) in both normal and crisis times. The federal government, by dint of its preferred position in borrowing on international markets, can finance the gap between the two prices without fear of having to liquidate its position. The banks, because of the precautionary demand for excess reserves, are induced to liquidate earlier and, in part thanks to Sarbanes-Oxley, have to mark their assets to market not only if they liquidate but if their neighboring banks do so.

The desire to "protect taxpayers" runs the risk of getting the price wrong on how to pay for those loans. The current market price is not the right price -- that's the price banks could get without intervention, and accepting that price ends up causing bank failures. It's also not the hold-to-maturity price -- offer that, and the banks will beat a path to your door offering everything they have. (Banks don't like intermediation; they are paid to do it by borrowing short at lower rates and lending long at higher ones. If you could get the profits without intermediating, everyone would want to be a bank.) We want to get the price right, but in this case liquidation is about as thoughtful as a Reno wedding.

While many on the left and right will still cavil over the details, the basics of the deal are in place, and quick acceptance of the plan (probably with the Dodd amendment, though I have yet to sort through all 44 pages of that thing) is better than any other idea people have out there.