At least one liberal reports this as proof we need to keep corporate taxes high:

The Government Accountability Office said 72 percent of all foreign corporations and about 57 percent of U.S. companies doing business in the United States paid no federal income taxes for at least one year between 1998 and 2005.

More than half of foreign companies and about 42 percent of U.S. companies paid no U.S. income taxes for two or more years in that period, the report said.

During that time corporate sales in the United States totaled $2.5 trillion, according to Democratic Sens. Carl Levin of Michigan and Byron Dorgan of North Dakota, who requested the GAO study.

The report did not name any companies. The GAO said corporations escaped paying federal income taxes for a variety of reasons including operating losses, tax credits and an ability to use transactions within the company to shift income to low tax countries.

It might be worth noting, though, that a majority of these firms had no taxable income. For U.S. corporations, 9% had no gross profits (sales minus cost of goods sold), another 7% had no total income (gross profit plus dividend, interest, rent, royalties and capital gains or losses, and other losses.), and a clear 58% more had no taxable income before any net operating loss deductions or special deductions. 69% of that last number comes from deducting things like salaries, interest, depreciation, advertising and the like. (Source: GAO study.)

The Tax Foundation notes that 99.7% of the corporations in the study that paid no income tax in 2005 were large. Why did they not pay taxes?

What should be clear is that governments that have higher taxes induce their firms with overseas operations to move revenue to the low-tax countries. The graph below (source) comes from 2003. The Tax Foundation has shown Germany's corporate tax rate falling below ours by 2006, leaving on Japan at 0.6% more than ours. (See also the KPMG survey.) 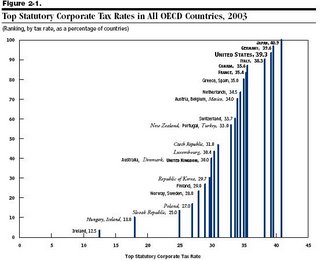 Senator McCain's and Congresswoman Bachmann's support of cuts to corporate tax rates are in fact consistent with trends around the world. And the GAO study, if anything, shows the ineffectiveness of trying to collect taxes on multinational corporations by a high corporate tax rate.