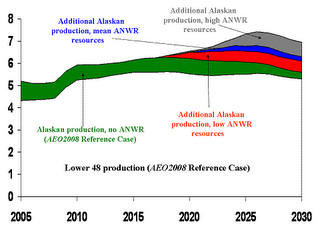 Stein's Law, "If something cannot go on forever, it will stop," came to mind to me today while reading a post on Angry Bear about ANWR. To get at the thought, consider this graph above, which is from a report that pgl and most of the ANWR-ain't-diddly-squat crowd quote. You know, the one from EIA that says ANWR will make barely $.02 a gallon difference for gas. See if you can find the heroic assumption in the actual passage:

Did you catch that? It assumes OPEC's behavior in ten to twenty years will be to offset (potentially) any change in prices that occurs. It has complete control of the price. Were that true, why would people caterwaul about speculators? Can't OPEC control their behavior too?

These very same people are the ones who contend peak oil will drive the price of oil ever higher, which increases the temptation to cheat within the cartel. They never cheat, do they?

Now read that graph again. The part unshaded below the green area is production of oil in the lower 48; the green part is the current production in the leased parts of Alaska. You know, the part Pelosi says the oil companies don't use enough currently. Those other areas are the three possible projections for output from ANWR. Without additional drilling, US production in their model peaks in about ten years. (Just put your finger over all the colored areas except the green.) Drilling more of what we current lease is more a change in timing, borrowing against future oil production, unless you think the oil companies are sitting on proven reserves after a one-year 75% rise in prices.

Last point: the projections assume that in 2020 the price of a barrel of oil (without ANWR) is $59.70 and $70.45 in 2030. Were these accurate, you can see that there isn't nearly the need to increase production; prices will fall reasonably soon on their own. And they might. But people making models estimating the impact on the price of oil 20+ years from now are dealing the most imprecise of estimates. It assumes that world oil consumption is 117.6 million barrels per day. That's about thirty million more than now; if China continued to grow its consumption at its 1995-2005 rate, it would consume 21 of the 30 additional alone. And let's not forget India, perhaps for another four million. (It assumes the US would by 2020 only consumer 800,000 bpd more than it did in 2006.) Are all those assumptions realistic to you?

One of those things has to change, via Stein's Law. If prices are going to be where EIA is putting them, some economy is using a lot less energy than current trends project. Something that adds 10-20% more to our own production and reduces imports of oil by 6% (both figures for 2025, again if you beleive EIA), certainly seems a reasonable first step, lest that economy be ours.

UPDATE (7/23): pgl responds, arguing that the price in 2020 is irrelevant to the comparative statics. That's only true if you think the elasticity of demand at $60/bbl and $140/bbl are the same. I doubt this is true and would like him to write out the demand equation that does that. Given that the EIA included the price in its spreadsheet, I'm going to argue it was part of the calculations.