One of the data we were waiting on this week is the usually-obscure H.4.1 report from the Federal Reserve, which tells us the factors affecting reserves. The line to look at is "Loans to depository institutions" -- the amount of discount lending the Federal Reserve has accomplished with its new policy. The data show that there was none outside the very-public declaration of the four NYC banks yesterday. There must have been some before, given the average for the week is greater than $2B/5, but whatever else there was was extinguished by the close of business yesterday. 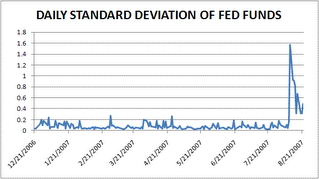 That would indicate to me that banks are still using the Fed Funds market, where today the Fed put in $14 billion in 12-14 day repurchases. The market there has died down a little as the nearby graph shows (this measures the standard deviation of the rate on trade of Federal funds) but still with volatility well above recent levels. These OMO trades stopped out at around 5% on agency and mortgage-backed securities; Treasuries were discounting at around 3%.

James Hamilton picked up on this point yesterday, wondering if there's been a stealth easing:

...whatever is motivating the Fed's most recent open market operations, it is not an effort to keep the effective fed funds rate right at the announced target. My guess is that it is also not a simple effort to keep the effective funds rate at some other number such as 5.0%, either, but that instead the Fed is responding to specific concerns, perhaps related to the comment I made above about credit rationing. Although Bernanke has a commitment to openness about monetary policy in general, he would not be in a position to give us the details of any such concerns, since the Fed has to be very careful not to let its own announcements become the cause of a panic withdrawal of deposits or lending from institutions facing temporary challenges. Suffice it to say that the Fed likely has some real worries at the moment, and they're not adequately summarized by just looking at the interest rate on a volume-weighted average of fed funds trades over a day.

Based on where fed funds have been trading so far this month along with today's closing price of 95.015 for the August fed funds futures contract, the market seems to be expecting an average effective fed funds rate for the remaining days of August of 4.94%. The September contract (95.06) is predicting exactly the same thing for the following month, and lower values as we go on from there. I suspect that the period since August 10 will become one of those episodes where the series for what the fed funds "target" actually was will always be noted by an asterisk by scholars, because the Fed's objective at the moment is something other than achieving any particular value for the effective fed funds rate. But whatever label you want to put on it, we're not going to be seeing fed funds averaging 5-1/4 again any time soon.

That sounds about right.