The loose ends of this bridge talk 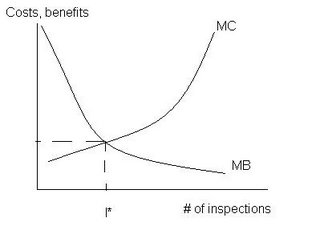 I've summarized some thoughts on causation and on cost-benefit analysis over the last few days, following an initial post on the process of thinking about inspection and building. The most criticism I have received is from one other Minnesota blogger who uses a rule that any bridge that failed MUST have not been inspected correctly. But of course dogs don't get economics. We undertake actions up to the point where the marginal benefit just equals the marginal cost, and that includes inspections. Yes, there are benefits to inspections greater than I*, but they are not worth the cost.

The costs we've paid are fairly substantial. Ed Morrissey has detailed the expenses on transportation in Minnesota by the state and federal governments. Earmarks diverted some money, but both parties are equal opportunity consumers of pork; care to guess in whose district was spent the $1.3 million for the Virginia MN recreational visitor center? Would it happen to be the guy who now chairs the Transportation Committee in the House? And the state has a transportation budget of $2 billion. We still wait for the evidence that somehow we are short of I*. (And, Ed also notes, those marginal costs include the inconvenience of drivers, some of whom vocalize their inconvenience.)

Let me then tie up my two loose ends I mentioned yesterday. First, if you agree that some bridge failures are unpredictable events, how can you argue that CBA is useful? If you can't write down the probability of a bridge failure because you can't know the probability distribution? (By this I'm saying you're argument is ontological -- you can't know, not that you're just not trying hard enough to write it down.) The way this gets covered in CBA is by a method called gross sensitivity analysis. I suggest this paper (in .pdf) as a way to look at the problem. The British -- who in my opinion are well ahead of the US in use of CBA -- provide guidelines (example) to their regulators to both require CBA and how to use sensitivity analysis. In the review of inspection procedures that will occur over the next year in Minnesota, due care should be paid to whether MnDOT correctly uses sensitivity analysis. I prefer gross to net because gross does not require you to actually know the probability of bridge failure if you inspect one time or two.

Second, it may seem odd, heartless, cruel, unctuous, or what-have-you, to put this in calculable terms. I have already made mention of the famous smoke alarm studies which put the value of a life based on one's own actions. I use a story in class from my early courtship of Mrs. S. Before they installed a traffic signal, 15th Ave SE in St. Cloud crossed Highway 10 via a stop sign. Hwy 10 is a busy road Sunday evenings in the summer with families returning from lake cabins and camping. I lived on one side and the Dairy Queen was on the other. I used to prepare dinner for Mrs. S on Sunday evenings and then treat us to Peanut Buster Parfaits from that DQ. I drove a Tempo with a stick. On approach to the stop sign for the return trip I had two top-heavy PBPs to balance while I made the treacherous decision whether to cross the road. The best way to balance PBPs in the pre-cup holder days was to place them on the driver's seat between your legs; this is not comfortable. Also, Tempos did not have A/C standard, so it's hot and your parfaits are melting. A string of two minutes worth of cars is upon you as you stop, but you figure you can cross with a chance of one in ten thousand of being in an accident. Do you cross? Most people I ask say yes. No doubt one inspiration for crossing for me was the opportunity to return with unmelted parfaits to my lady. Who knows what reasons you might give, but they are yours, and they are real. I can then use reasonable numbers for the value of the parfaits and your time and calculate the value of your life, much like the smoke alarm story.

Now that seems trivial, certainly, but the point is we can find many such stories in which the person's own actions place a finite value on their life. (I wonder if those who find this still heartless have anything to say about the practice of forensic economics?) Once the value is assigned, it becomes amenable to comparison to the thousands of little values gained and lost by government policy. If one is interested in reducing waste in government, rather than politics as usual, you shouldn't toss careful analysis aside.