Obamanomics not to include free trade

As I warned last spring, it was hard to tell President-elect Obama's positions on trade policy. Aside the NAFTA dance, we did not see much interest in the subject from him. I found Dan Tarullo's answers in the WSJ online debate on trade uninformative. And in the October 15 debate with McCain, all you got from Obama was Bill Clinton's rhetoric from the 1992 campaign before Ross Perot pushed Clinton into a free trader.

So it has to come as no surprise that the pick for U.S. Trade Representative got passed over by Obama's first choice.

Rep. Xavier Becerra has decided not to accept Barack Obama's offer to be United States Trade Representative, according to an interview the California Democrat gave to the editorial board of La Opinion, a Spanish-language newspaper in Los Angeles.

...Becerra said, "My concern was how much weight this position [U.S. Trade Representative] would have and I came to the conclusion that it would not be priority No. 1, and perhaps, not even priority No. 2 or 3."

Maybe it will take another Perot to push Obama into the arms of free trade. Barring that, the Columbia Free Trade Agreement is probably dead. And Canada can't be too happy with incoming Ag Secretary Tom Vilsack.

On the other hand, Becerra now regrets his vote in favor of NAFTA. So while the Obama team may not advance the cause of free trade, they might be distracted enough to not do it too much damage.

Two graphs that I find interesting together 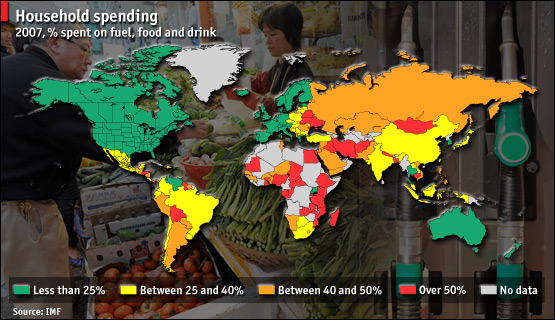 From Christian Broda, the second graph and this:

We need to remind politicians and the public that the gains from trade are broadly shared. Every time the discussion over trade is diverted towards the problems facing specific producers, be they farmers in France or textile workers in the U.S., we miss the central point. Trading allows everyone, and especially the poor, to buy things that they could not otherwise afford. Without better public understanding of these facts, governments will not only keep supporting policies aimed against China and Wal-Mart but may receive the uninformed support of many consumers who are benefitting from trade.

The higher your expenditures are composed of tradeable goods, the greater the benefits of globalization. The highest shares of food and fuel in one's budget are for the poor (we would say they are income-inelastic.)

h/t: Mark Perry for the first graph, McQ for the second.

Where the candidates stand on free trade

Cato's Center for Trade Policy Studies has a neat tool that looks at the voting records of Congresspersons to determine their stances on trade issues. It's neat because it divides their records between votes for trade barriers and trade subsidies. Those voting for low barriers and no subsidies are free traders. There are those who are for low barriers but subsidize domestic producers -- these are classified as "internationalists" and not free traders. I have written down the results for the three presidential candidates remaining, plus for Senator Norm Coleman:
Wellstone! by the way was the closest thing to an isolationist as we've had.

P.S. This opposition to trade subsidies should also be applied when thinking of tax breaks to dissuade airlines from taking jobs to other states. Use of the public fisc this way is a lousy deal for both small airports and large. It's all the same logic.