Regulating the poor out of a car

I had tweeted over the weekend on a story that the Tata Nano, which is sold for $2500 in India, is being fitted with safety and emissions features that will drive up its cost to $8000.

Tata Motors already has made a European version of the four-seat car that will cost about $8,000 when it debuts in 2011, and a Tata Technologies official said privately that the U.S. version is expected to have a comparable price. The official did not want to be identified because the price has not been made public.

Warren Harris, Tata Technologies president, would only say that the price would be more than the roughly $2,500 charged in India.

Charlie Quimby thinks ... well, I am not sure what his protest is. See if you can figure this out:

Now maybe the professor intended it as a one-liner, but my hobby is digging into one-liners attempting to become political memes � in this case, that government regulation is denying American consumers a great, inexpensive mode of transportation.

You know, like it denies toddlers baby charms made with lead, forcing their moms to buy cadmium instead. I mean, how many kids actually gnaw on their bracelets?

But the young fella with only $3000 to spend on a car can buy it in India but not in the US due to regulators. Is that right?

Here's a bit more about the Tata Nano, from Car and Driver.

We must not forget that the Nano is first and foremost a car for India, a country of about one billion people where fewer than two percent own a car. It was instigated by Ratan Tata, the chairman of the Tata conglomerate, India�s biggest corporation, in a gesture that looks as much philanthropic as business savvy. Watching the way whole families travel on motorcycles�rider, pillion passenger, and two children hanging on�and noting the terrible toll in road deaths involving two-wheelers, Tata called for a safer four-wheeled vehicle that bike riders could afford.

To be able to make a car so cheaply, the designers threw out safety features like airbags and stability control. Ever driven a golf cart at full throttle? Well, the Nano's flat-land top speed is allegedly 65 mph on 12-inch wheels. They also put no emission controls on what's essentially a pepped-up, 35 hp lawnmower motor.

So I cannot tell which of these points he's making:
I suppose he could be arguing that we should keep those people on bicycles, because Charlie likes bikes, but I'll bet that's not it.

As to the first point, I say that's why we have markets. I'm watching commercials during football yesterday and see an ad for Pepsi Throwback, or as I think of it, Mexican Pepsi. You know, the kind with real cane sugar. "For a limited time." Is there a market for that? Given the number of Anglos I know who go to Mexican groceries to buy it, and given Pepsi had to sue a Georgia distributorship to get it to stop making the cane sugar version, I'd say there is. So why does it persist in the corn-syrup variety? There was a time we decided corn syrup was better, now we think it might be worse, in terms of obesity. But corn is plentiful while cane sugar has to be imported and is subject to lots of tariffs ... from the corn syrup vendors (and the beet farmers.) So tastes will change, and eventually people may be willing to pay higher prices for sugar. But there will be others who continue to sell cheaper cola products with corn syrup. Why can't both products co-exist? Of course they can, and so can a Tata Nano alongside your Honda Civic. You can scoff at the idea that there's a market for that car, but it's Tata's decision to make.

People are willing to pay for safety, certainly, as well as a heater or air conditioning. But not an unlimited price. To take Charlie's second possible point, let's look at the demand curve for Nanos: 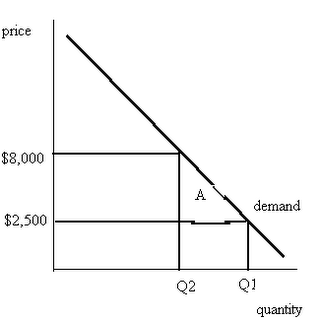 When we raise the price from $2500 to $8000 by adding safety doodads, heaters, etc., we reduce the number of Nanos sold from Q1 to Q2. Those who buy the Q2 Nanos are perhaps not as happy as they would have been with the $2500 car -- they have forked over $5500 for something they might have spent on tuition for their child to go to that private school down the road -- but they decide the car is still worth it at $8000.

What to say about the consumers represented between Q1 and Q2? Perhaps they can, as Charlie later suggests, buy a used car. But that market contains car without warranties, and with repair bills that have a lot more volatility than a new car. For a poor family, a broken car is a serious burden. Or they could use public transportation, or ride a bicycle, or walk. All of these are possible, but they limit job choices and make shopping for bargains harder. Their lives are made poorer. The use of the substitute to the Nano removes value from their lives (what economists call "deadweight losses," represented by the area of triangle A in the graph above. If it was 1000 people who were pushed out of Nanos because of the regulation, that cost would be $2.75 million (the area of A for a triangle with base 1000 and height $5500.)

Add to this the possibility that walking and biking are perhaps more dangerous than riding in a Nano -- isn't that why Mr. Tata made them? -- and it is not at all clear that a family is better off with regulations that add $5500 to the price of a car.

P.S. Cars also help you get out of the way of a natural disaster.