New Quarterly Business Report is out 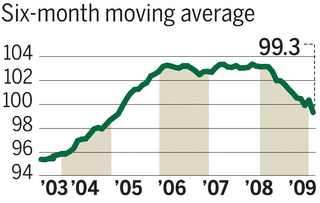 The news story in the Times is here. There's very little good news in it, alas. The continued decline of our local leading indicators series (above) gives a 99.3 reading for February, continuing a decline that began in earnest a year ago, making an end to the local recession before the end of summer quite unlikely. Our probability of recession index for February showed a 94% chance of recession 4-6 months ahead (again, for the June-August period.)

For Scholars readers, you may find a copy of the report here.

As supporting evidence, you may wish to see Minneapolis Fed President Gary Stern's address to the Minnesota Economics Club yesterday:

Once under way, the pace of the expansion is likely to be subdued for a time. There is historical precedent for this, since the recovery of the early 1990s was initially quite modest, as was the recovery earlier this decade. More importantly, in view of the state of the credit markets, it seems a fair bet that it will take time for momentum to build. But with the passage of time�as we get into the middle of 2010 and beyond�I would expect to see a resumption of healthy growth.

I still see the possibility of a trough of the business cycle in late 2009, but if the recession and recovery is U-shaped, that trough may be barely perceptible this year.