When you look at it that way 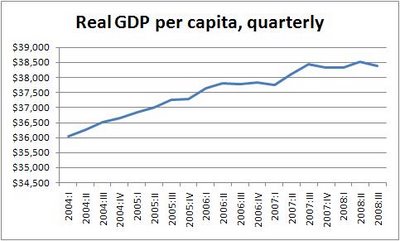 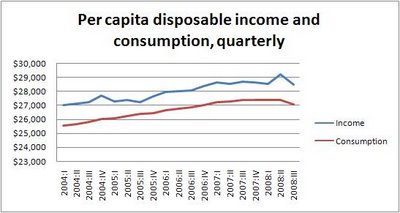 So we have a real schizophrenia today. People are going to the mall for holiday shopping, parking hundreds of yards away and waiting in long lines to check out. But then, these same people go to parties and argue about whether the Obama economic stimulus plan should be $500 billion or $1 trillion. It feels so bad that President Bush is justifying his economic intervention by saying that �I�ve abandoned free market principles to save the free market system.�

What�s important to recognize is that even at the bottom of the current recession, sometime in mid-2009, the living standards of the typical American will still be amazingly high. In fact, even an aggressive contraction in real GDP will leave per-capita real GDP above 2005 levels.

Brian Wesbury and Robert Stein, First Trust, yesterday. I have found it funny that when I say unemployment might go to 8-9% I hear gasps from reporters. Most of them are in their 20s and 30s, though.

UPDATE: �Thanks for the link, John, and welcome to his readers.