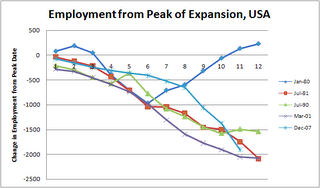 The light blue line was updated this morning to reflect the decline in employment reported this morning. There are 1,911,000 fewer jobs in the USA in November than in December 2007, when the recession began. 10.3 million workers are currently unemployed.

From the Monthly Labor Review, February 1983:

The economy entered 1982 in a severe recession and labor market conditions deteriorated throughout the year. The unemployment rate, already high by historical standards at the onset of the recession in mid-1981, reached 10.8 percent at the end of 1982, higher than at any time in post-World War II history.

The current recession followed on the heels of the brief 1980 recession, from which several key goods industries had experienced only limited recovery. Housing, automobiles, and steel, plus many of the industries that supply these basic industries, were in a prolonged downturn spanning 3 years or more, and bore the brunt of the 1981-82 job cutbacks.

Unemployment rose throughout 1982 and, by September, the overall rate had reached double digits for the first time since 1941. A total of 12 million persons were jobless by year end�an increase of 4.2 million persons since the pre-recession low of July 1981.

If we're looking for where we go from here, I'm holding up that recession as the most recent parallel.

Worth noting from the graph above -- cumulative job loss is less than that which occurred in the last recession in 2001. For all the hue and cry, a 6.7% unemployment rate is less than the 6.9% rate in April 1980 and the rate stayed at or above 6.7% from then until December 1986. Hold off on that Great Depression talk for a while yet, please.

Does this mean we are heading off the map in terms of past experience? It is hard to tell by just focusing on the average experience of the previous seven downturns. The previous two recessions�1990�91 and 2001�lasted only eight months. Assuming that we remained in recession through November�and I don�t think that conjecture will draw much debate�the current episode is already a year in duration. A more apt comparison might therefore be the �bad� recessions of recent memory, the 1973�75 and 1981�82 episodes, which both lasted sixteen months.