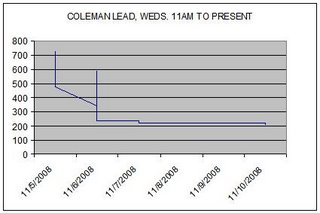 It appears to me, and I think as well to John Hinderaker (see bottom of Scott's post) that there may have been three typos, or two typos and an example of the old children's game 'Telephone', that accounts for most of the decline in the vote margin for Norm Coleman. The graph to the left shows the declines. You see three distinct drops. Based on the data I have by precinct (three snapshots, taken Weds morning, Sunday afternoon and last night), I see three major changes.

If those are three mistakes, then what's the odds three mistakes all go Franken's way? Assuming the odds of a mistake are 50-50, the answer is .125 or 7 to 1. I'm not inclined to call that statistically imponderable.

There is a legitimate question that Scott Johnson asks this morning, which is the admission of a more human element in reporting results than was anticipated. There is supposed to be a secure, automated transmission of results that failed in this case. Secure data transmissions would have prevented these typos or relay errors. In a narrow election, as SOS Mark Ritchie should now understand, these types of mistakes, even though relatively rare and most likely innocent, still give rise to the possibility of misunderstanding and claims of electoral mischievousness. The reason you have these things automated is to avoid blaming "exhausted election officials." If the system wasn't working before the election, didn't someone have the obligation to make it right before the biggest election in Ritchie's term?

There are other errors that need clarification as well, including the ballots in a HennCo official's car, or some other changes (I still haven't seen a good account of the Coon Rapids W2P1 revisions for example; though they are reductions across the board, the net effect is a 34 vote reduction in Coleman's margin; there were also key errors in Brooklyn Park P5 netting 30 to Franken and 25 for Franken in St. Paul W3P3.) But I think for the most part it behooves those who support Coleman to turn away from the larger errors as being a source of the problem and focus on ballot security and answering the qui custodiet custodiens problem that's about to face them. (For one thing, who chooses the canvassing board that will hear the disputed ballot arguments?)

UPDATE: While I was writing, so was Ed:

I spoke directly with this election judge, who elaborated on this information. The county actually knew about the failure four days in advance. The election judges alerted the county to the problem, but they declined to reprogram the cards with the proper IP address. Election judges have to go through training on how to use these machines, and one can understand the frustration this person had at being told to just forget it all.

One point should be emphasized. The ballots got conveyed to the county facilities by one person. Before the advent of electronic transmission, ballots were almost always guarded by two people to avoid the appearance (and the reality) of ballot tampering. In fact, that�s the reason why states and counties went to electronic transmission of ballot counts � to keep human hands off of the tallies as much as possible.

Hennepin County issued no written instructions for the processing of ballots in the failure of electronic transmission. It looked to this judge like they simply made up the process as they went along. That failure is itself unconscionable. The county should have already had a back-up plan, and certainly should have had a written process for safeguarding ballots and results within the four days that they knew of the programming failure, especially if they weren�t prepared to reprogram the precinct machines � which the election judge told me would have been a simple thing to do, and easily accomplished in the four-day window.

Regardless of the outcome of this election, the Ritchie Secretary of State's office has been shown to be careless in assuring clean elections, which was the centerpiece of his campaign in 2006. Ed is calling the Ritchie office for comments. I believe this is not just the case in HennCo. The Moountain Iron case, while perhaps innocent of malfeasance, also admitted of human error when a tape was available for transmission:

Officials say the Mountain Iron voting discrepancies may have occurred on election night, when city election officials called in the results to the St. Louis County seat in Duluth. Because St. Louis County covers more than 7,000 square miles and some precincts are three hours away from the county seat, the county allows local election officials to call in unofficial results ahead of official tallies.

Why? Could not the optical scanners in Mountain Iron have sent that data by modem?