I was reading Ed's exasperation with people citing InTrade and concluding that the McCain-Obama race is somehow over. I don't read InTrade the same way.

To tell the story, let me use a very oversimplified model (and wonder at the end if it's TOO oversimplified, though no doubt my commenters will tell me anyway.) Let me that if Obama wins a majority of the electorate he will also win the Electoral College, so that I can place the race on a single scale and not worry about fifty state races. Let me also take advantage of a useful observation made by Mark Thoma that the standard deviation of polling data at the Gallup poll size is 1.67%.

The InTrade data give us virtually a representation of the probability of McCain winning and Obama winning. It says that (let me round a little for the Pittsburgh Steeler fans, like Ed) and say that currently, Obama has an 85% chance of winning and McCain a 15% chance. To put this in some context: after the Rays went up 3-1 on the Red Sox last night in the bottom of the 7th, at that time the Rays had about an 82% chance of winning. (For more, try Walk Off Balk.) You're behind, it's late, but you don't think of two run leads as hopeless.

Let me illustrate then with a bell curve -- please click the image to read more clearly: 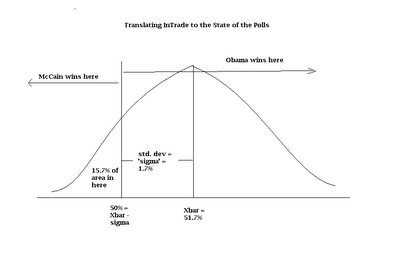 Statistics tells us that 15.7% of the distribution of the curve lies below one standard deviation, to the left of the line drawn on the left of that graph. The other line which intersects the peak tells us the mean. That number would be the share of votes in a two-party race that Obama would receive (ignoring Nader and Barr is part of my simplification here.) 15.7% is just about where the price on that McCain bet on InTrade is. (To the second decimal, I put it at 1.04.) So we conclude that the difference between McCain and Obama is about 3.5%, about 51.75% for Bam versus 48.25% for Mac. That's a bit better than the RCP average. Rather than despair over InTrade, I'd hold it up as a measure of hope.

So what can be wrong with that calculation? A few things, not all of which I think I've fully thought through. Obviously there's the unidimensional assumption. It's possible, as in 2000, for a candidate to lose the popular vote and win the EVs. I'm going to say that isn't a big deal here, but you can argue with that if you want. Second, as we approach November 4, the possibility of McCain moving the needle enough closes down and you get convergence towards $1 on the Obama contract. I haven't factored date of the poll into this, but it seems to me it matters, just as the reduction of the number of outs left last night diminished the Red Sox chances of catching the Rays. Lastly, and as Ed mentioned, the InTrade market is still a bit thin: I think someone with $50,000 could move that needle significantly, and it isn't as if the Obama campaign is short $50k. As I wondered last time.

I'd tell those who think the race is over: You can invest $.85 and return yourself a dollar in little more than two weeks. Not many other market opportunities for you to get that return. Whatcha waitin' for? (And for Maverick fans: Six-bagger!)

UPDATE: Welcome HotAir readers. Ed and I will have to disagree about this one. The market participants of InTrade don�t live in a vacuum. They read the data and the polls, they bring information into the marketplace about the likelihood that McCain wins versus those who think Obama wins. The prices are an outcome of that struggle between them. Those who get it right over time for other events tend to dominate that market; those who bring biases and uninformed opinion will over time lose money and depart from the market. They aggregate information from many people with different opinions, and a price comes out that reflects that information. In the stock market, that price is a fair assessment of a firm�s value, even though the marketplace is dominated by a few traders for many firms.

Any individual trader selected at random might not have as good information about the race as Ed Morrissey. But the aggregation gets the price roughly right, consistent with the odds.

This has been subject to a good deal of debate. Chris Masse has blogged the discussion between Robert Erikson of Columbia and Justin Wolfers of Penn on the matter of markets versus polls. There can, of course, be data manipulation -- and maybe there has been -- but it makes no more sense to say prediction markets cannot tell us anything about uncertain outcomes than it does to say marketmakers on Wall Street cannot tell us anything about the firms whose markets they make.