Markets boo-boo, and so does government

Alan Greenspan thought that banks would never put themselves in a position where they might go bankrupt. Investment houses would never take on too much risk. After all, that could mean disaster and the threat of disaster should encourage prudence. And yet, many banks and investment houses evidently did take on too much risk. The incentives failed.

I too am surprised at how imprudent they were. Did they miscalculate? Trust the ratings agencies too much? Misread the systemic risk if other firms failed? Did they fail to appreciate the bite of mark-to-market accounting rules that the government required? Or perhaps, this whole incentive thing that is at the root of capitalism, the profit and loss system that incentivizes firms is overrated. People are impulsive and make systematic errors

Those are the key questions of this mess. I have not seen them answered yet.

Meanwhile, I keep coming back to this quote:

�I made a mistake in presuming that the self-interests of organizations, specifically banks and others, were such as that they were best capable of protecting their own shareholders and their equity in the firms."

And the alternative? What should protect the shareholders? The altruism of regulators?

Russ Roberts, last week. Since someone asked what I thought of Greenspan's testimony, truth is I thought Russ handled it well enough that I have nothing to add. 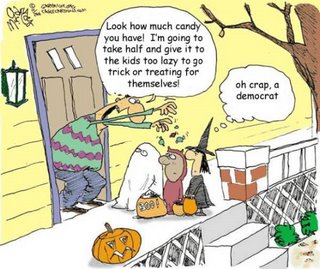 I sent a piece of humor to some friends today in the form of this cartoon. A relative emailed back, "Or :LOOK AT ALLTHE CANDY YOU STOLE;I AM GOING TO GIVE BACK TO THOSE WHO DESERVE IT!!! {e.g., the ones who stole:AIG,LEHMAN, for those who voted for deregulation,etc.}" I see AIG and Lehman as having made huge mistakes, which Congress and the Bush Administration decided to help cover for fear of something worse happening than moral hazard. You can disagree with them -- many do -- but effing up to the tune of billions of dollars is not fraud. It is part of a profit and loss system. And asking someone to forgive your losses when you do screw up isn't fraud either; it's as part of human nature as asking my wife to forgive me when I whack the side view mirror on the garage door jamb, or come home at 3am with liquor on my breath. (The latter has not happened ever -- I wait for conventions to do that.) I'm glad my wife's forgiving. I'm less glad the government is.

Markets are human activity, so they are prone to errors. So too is governing. The question is, who's less prone?