How to close a deficit

Ed's first question to me today was about the new McCain paper on closing the budget deficit by 2013 (and several other economic proposals.) It's worth noting that the CBO had scored the budget as in balance by 2012 if the Bush tax cuts had expired, so the debate Democrats want to have is how to reduce the deficit while extending the cuts. McCain's plan includes three items -- promoting economic growth, comprehensive spending controls, and a bipartisan approach to reducing the deficit. Justin Fox calls the last an appeal for the benefits of gridlock: You only feel safe with a Democrat Congress if you have a Republican president.

I remember reading a paper by Mark Zupan many years ago making this argument. See also Chari, Jones and Marimon [1997] or Carmines and Ensley [2006]. The problem with the argument back in the 1990s was that the theory argued for a Democratic legislature and a Republican executive. The world of Newt Gingrich and Bill Clinton didn't fit. Neither, to some, did Reagan and Tip O'Neil. At any rate, I don't have a good guess of how much restraint you would get from that.

How much would a normal amount of economic growth reduce the deficit? If we look at the standardized deficit you get about 0.3-0.4% of GDP, so that the 2009 estimated standardized budget deficit was to be only 0.9% of GDP (ab 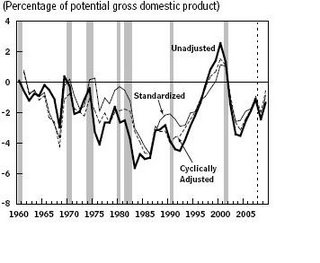 out $133 billion). So what you hope is for a budget that works down the deficit by about one quarter of one percent a year on a permanent basis. What McCain has to sell is that this is done by spending restraints he can put in place (with a Republican legislature, lest he sell his Congressional delegation down the river.) As the graph to your right should make clear, the size of this "deficit problem" is not so large when placed in context. Neither is the cure for it, if you believe a zero deficit should be a goal of federal budget policy.

One other thing I said on the air with Ed was that there was not much of a dollar policy either way. McCain at least pays lip service to it today...

...but I wouldn't tie it to the price of oil as its only reason. And he needs to say how he would create it. The Fed doesn't seem inclined to do it for us.

The McCain campaign also released a memo today by Douglas Holtz-Eakin, its senior economic policy advisor, that claims the Obama plan taxes everyone with income above $32,000.

If you own stocks, Barack Obama has a plan to raise your taxes. During the primary, he proposed lifting the cap on income subject to Social Security taxation. He has proposed to repeat the failed Windfall Profits Tax and new taxes on natural gas and coal. He is going to raise taxes on small businesses. There is no group rich, poor or other who will not be adversely impacted by his tax increases.

Even more troubling, Barack Obama has proposed increasing Washington spending and expanding government programs while failing to outline how he will pay for his proposals. Where will Barack Obama make up the difference?

Mandatory spending is about to rise as a share of GDP to about 11% on a standardized basis. It will continue to rise as aging demographics drive up Social Security and Medicare spending. There is not a shred of evidence yet that the Obama campaign has dealt at all with these issues. I wish McCain would say more, but today's plan is at least a start.