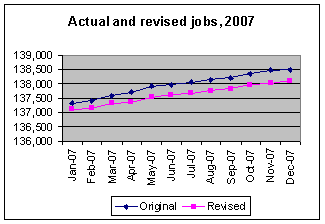 The level of payroll employment fell slightly in January, down 17,000 versus a market expectation of up 58,000 (let alone the ADP projection of +152k.) The goods sector was down as expected, but there was more weakness in retail sales and professional/business services than I think people were looking for.

There was also a jobs revision that reduces the growth in total jobs for the 2007 to reflect a new benchmarking of the payroll survey. This revised down March 2007 employment levels by 293,000 jobs and December 2007 by 254,000 jobs. The WSJ suggests this helps support the Fed's aggressive cuts in interest rates.

Given the other news of the week, it's not unreasonable for Captain Ed to wonder if we've found the business cycle peak.

Now we have crossed a Rubicon of sorts by seeing negative numbers in jobs for the first time in 53 months. The economic markets will see that, rightly, as a sign of continuing weakness in the economy, despite employment gains in most industries outside of residential housing and associated lending.

Expect to see the markets take a moderate hit today. The big question will be whether the Fed will wait six weeks until its next meeting to take any further action.

I would be surprised if the Fed acted on this measure alone, but a negative February, perhaps in the cards after the rise in unemployment claims last week, could get you there. Whether or not it's the top, I say, will need probably a negative February number in employment and a decline in retail sales. Retail trade employment was up 11,000 in January, but we'll need to see if that's because of the odd seasonal patterns this year or a sign that things are not as bad for retailers as we might think.