If you just took the headline number -- 0.6% growth in the fourth quarter, worst quarter in five years, versus a market expectation of 1.2% -- you would think the GDP report today lays the foundation for believing recession is imminent and that the Fed's expected move to cut interest rates another 50 bp would be more in line with what one would expect in a recession (though it might not yet meet the Taylor rule expectation.) But some are noting that the disappointment is more than made up by the housing sector and a very sharp selloff from inventories (knzn refers to a near-3% growth rate in " nonresidential final sales", which I think I know what that means.)

Well, nice try. Without the foreign sector, gross domestic purchases rose only 0.2% in the quarter, and real final sales decelerated from 4% in the third quarter to 1.9%. (Which means, btw, that real final sales to domestic purchasers -- not overseas -- was lower at 1.4%.) So while we might have some explanation for missing the expectation of 1.2%, you could hardly say we should have beaten it. The very best interpretation would be that the numbers generated little new information about the state of the economy. 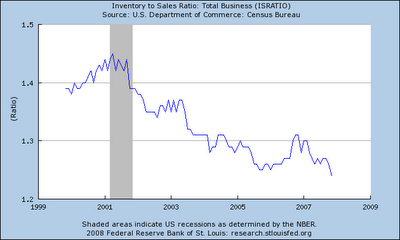 Moreover, I don't know that we should expect anything positive for first quarter 2008 out of the fact that inventories came in negative. As the following graph shows, firms have exhibited a desire to hold less inventories as a ratio to sales for years now, and with retail sales continuing to soften it could be argued that the decline in inventories in Q4 was planned. A negative report from the PWC survey is an argument in favor of this.


The most negative news is the possibility that productivity growth turned negative this quarter, which could mean a stagflationary period, but there needs to be some more data to verify that.

UPDATE: Yup, half a point.