I thought these would be better as a separate post.

As Janet and Michael have both noted, we had on Senator Coleman last Saturday on FW. (Audio here -- he's the first segment.) Whether you characterize the actions on immigration as a coming to reality, capitulation or cravenness, the result was that a combination of forces kept the Senate from passing a bill brought together in a back room and forwarded by people who thought they knew better. Since the bill is dead (seemingly, it's already been resurrected once,) it makes no sense to me to try to dissect it.

But something has to happen, because even if the sentiment on this bill was 20-80 against, the status quo is also a 20-80 proposition.

Regardless of what happened at the Senate today, there are still 12 million illegal immigrants living in the country, and that number is increasing at the rate of about half-a-million a year. And there's no longer any need for the Bush administration to keep playing the charade of "more enforcement" that received wide media attention in the past few months. The economic and social dislocations caused by illegal immigration are not going to disappear simply because the issue is no longer in the political headlights.

Combine this with a legal immigration system that admits about 1 million immigrants a year--most of which tend to be low-skill workers. The economic pressures that both legal and illegal immigrants put on the low-skill labor market are severe, and have been ignored for years. I suspect that the immigration "problem" would have been long resolved had the labor markets for high-skill workers--say, for example, journalists and attorneys--faced the same pressures as those faced by low-educated workers.

Now that the debate is over, perhaps we can return some sanity and honesty into the intellectual discussion of what immigration does to the United States.

I can quibble with Borjas about the elasticities of low-skill wages, but cannot find fault with the premise. Those areas that are most severely affected are going to pass laws without waiting for that debate, like Arizona. There, a Democratic governor considered friendly to Mexico nevertheless signed a bill with strict employer sanctions, bucking powerful members of her own party.

The pressure is undoubtedly there to do something. But laws are only enforced when they have some basis in the structure of our country's culture. Perhaps, as Janet says, "every other country" can tag and issue ID cards to their immigrant population. But we're not those other countries. We are a country that at one time was formed on the principle that all men are created equal and that all men have inalienable rights. The preamble of the Declaration didn't make any distinctions in attributes of humans -- that regrettably came later in the compromise over slavery that led to the signing of our Constitution. Mises.org is running an old essay by Frank Chodorov, a paleo-conservative before anyone knew any other kind of conservatism, in which he discusses how men come to these rights:

In that respect, they maintained, all men must be considered on a par. This was a brand-new base for government. In all political science hitherto known it had been an axiom that rights were privileges handed down to subjects by the sovereign power; hence there was nothing positive about them. A new king or a new parliament could abrogate existing rights or extend them to other groups or establish new favorites.

The Americans, however, insisted that in the nature of things all rights inhere in the individual, by virtue of his existence, and that he instituted government for the sole purpose of preventing one citizen from violating the rights of another.

It is worth remembering that, 21 years ago tonight, Ronald Reagan stood at a ceremony for the opening of the Statue of Liberty Centennial. There he said,

Call it mysticism if you will, I have always believed there was some divine providence that placed this great land here between the two great oceans, to be found by a special kind of people from every corner of the world, who had a special love for freedom and a special courage that enabled them to leave their own land, leave their friends and their countrymen, and come to this new and strange land to build a New World of peace and freedom and hope. Lincoln spoke about hope as he left the hometown he would never see again to take up the duties of the Presidency and bring America through a terrible Civil War. At each stop on his long train ride to Washington, the news grew worse: The Nation was dividing; his own life was in peril. On he pushed, undaunted. In Philadelphia he spoke in Independence Hall, where 85 years earlier the Declaration of Independence had been signed. He noted that much more had been achieved there than just independence from Great Britain. It was, he said, ``hope to the world, future for all time.'' 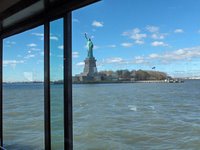 Well, that is the common thread that binds us to those Quakers [Puritans] on the tiny deck of the Arabella, to the beleaguered farmers and landowners signing the Declaration in Philadelphia in that hot Philadelphia hall, to Lincoln on a train ready to guide his people through the conflagration, to all the millions crowded in the steerage who passed this lady and wept at the sight of her, and those who've worked here in the scaffolding with their hands and with their love...

We're bound together because, like them, we too dare to hope -- hope that our children will always find here the land of liberty in a land that is free. We dare to hope too that we'll understand our work can never be truly done until every man, woman, and child shares in our gift, in our hope, and stands with us in the light of liberty -- the light that, tonight, will shortly cast its glow upon her, as it has upon us for two centuries, keeping faith with a dream of long ago and guiding millions still to a future of peace and freedom.

When they put the names of the immigrants on that island, they included the name Gulenia Hovsepian. Left by her family to an orphanage in Beirut, she had managed to get enough education to work as a nurse there and later in Cairo. When a man came in 1922 that wanted to marry her cousin and the cousin got cold feet, Gulenia said she would marry the man instead, if he was going to America. No Z-visa, no H1B. It was a new life, she thought, streets full of goods and paved with gold. She went on to have six children before her husband -- himself an uneducated man -- died of pneumonia after trying to make money roofing one winter. She took in wash, worked at a textile plant, scrubbed floors and did the best she could. And right after her husband died, she applied to be a citizen and stopped talking in her native tongue. 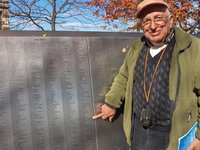 As you might guess, that's my grandmother. And the picture to the right is my father standing at the Ellis Island Memorial pointing to his mother's name.

She was an inspiration to us that hard work was rewarded here in America. And a reminder that people who get a chance to "keep faith with a dream" "guided ... to a future of peace and freedom" can build prosperous, productive families. And most of all, when you asked her nationality, she said "American."

I wonder how she'd've answered if she had been tagged like a piece of beef.

After Reagan gave his speech and the other dignitaries had given theirs, the torch of the Statue was lit and Reagan spoke a little more. At the end he turned to a choir that sang the last few lines of Emma Lazarus' "The New Colossus" from which the famous line about poor tired huddled masses. And then Reagan closed,

We are the keepers of the flame of liberty. We hold it high tonight for the world to see, a beacon of hope, a light unto the nations. And so with joy and celebration and with a prayer that this lamp shall never be extinguished, I ask that you all join me in this symbolic act of faith, this lighting of Miss Liberty's torch.

As you enjoy your Fourth of July, perhaps while you light your fireworks or watch those in the sky, try to remember why we make light explode in a night sky every year at this time. Is it to remember Fort McHenry and defending our shores? Or is it a beacon?