Those who knew "live free or die" 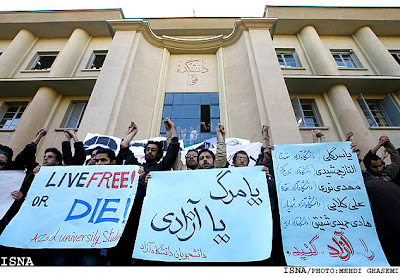 I finally got around to finishing the Imprimis for April, which was the much-heralded Mark Steyn address "Live Free or Die." �Steyn lives in New Hampshire and the phrase appears on our license plates. �"Our" is a tenuous connection; I left the state in 1979. �But many years later on a visit I drove Mrs. S up to the Bennington Battle Monument, which was the site of General John Stark's great defeat of the Hessians attempting to resupply Burgoyne in Saratoga in 1775. �Stark, who is New Hampshire's greatest military leader and author of the title of Steyn's talk, said to his troops before the battle,�"There are your enemies, the Red Coats and the Tories. They are ours, or this night Molly Stark sleeps a widow!"

Many widows (and some widowers) awake this morning to Memorial Day, whose spouses fallen understood the rest of Stark's more famous motto -- given late in his life from his Derry home -- "Live free or die: Death is not the worst of evils." It is a very basic reaction to force, to coercion. It was well understood by these students in the picture above (thanks to Gateway Pundit) that the option of living under the heel of government is so unacceptable that life itself is a worthy offering in trade for freedom. Steyn writes of a European author:

Mr. Oscar van den Boogaard ... was reflecting on the accelerating Islamification of the Continent and concluding that the jig was up for the Europe he loved. �I am not a warrior, but who is?� he shrugged. �I have never learned to fight for my freedom. I was only good at enjoying it.�

Today we honor not just those who learned how to fight unlike Mr. van den Boogaard but those who knew that there were worse options than the sword, and give thanks to those families who balance their honor and their loss.