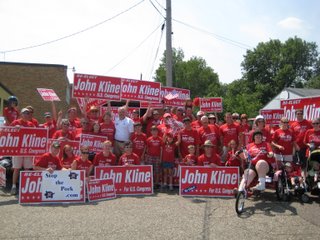 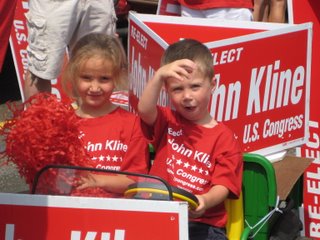 As many of you know, I volunteer for John Kline, Congressman from Minnesota's Second Congressional District. ELection years are parade years. When I started in 2004, I thought, "I can't do this parade stuff." Well, I was wrong - they are fun, exciting and just a good way to spend a few hours.

Parade watchers are mostly families and the enthusiasm of the kids and their relatives is a real upper. We usually have at least 50 John Kline supporters at most of our parades. Here are a couple of pictures from today's parade in Rosemount, MN. We had about 60 today, including the tots in the John Deere car, the strollers, the Harley Bikers (in the back of the photo) and others.

Last week, in Watertown, MN, home of John Kline's opponent, Steve Sarvi, there were at least 67 Kline supporters marching to Mr. Sarvi's 25. Needless to say, we had a great day.