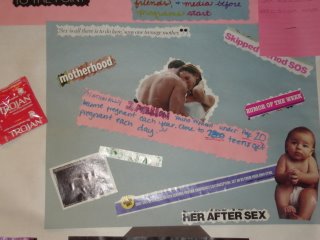 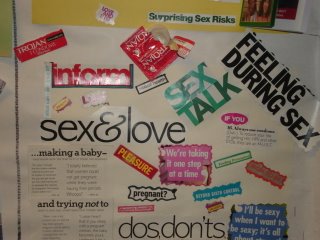 As we saw yesterday, this bulletin board -- appearing in a hallway near the Social Work Department at the university -- is trying to make points about sex education. Along with many condoms and their (opened) packages we find discussion of feeling during sex, some myths about sex and pregnancy, a lament that "only 49% of college health centers provide emergency contraception" ... which I think is not a condom. "2800 teens each day become pregnant," one note chastises, indicating that it thinks teen pregnancy is a problem. I would think people in social work would believe so; it must be part of their experience.

The board seems to dismiss the possibility that abstinence is helping reduce teen pregnancy, despite plenty of evidence and bipartisan support for including abstinence in programs to address the issue. Note that while I linked to some of Robert Rector's work, I don't necessarily agree that one should not talk about condoms. I simply think the board goes over the top in its pushing for condoms over abstinence.

This board appears in a hallway leading to offices of the Social Work Department, to which some newly enrolling students will walk in the next few weeks, some with their parents, to receive advising. It would be interesting to get their reaction to this board. Would it give one pause? Would there be nervous laughter? Would it raise questions? Would it educate?