DC Protest - Not - They have no Traction

This past Saturday, September 15, I flew to Washington, DC to join up with Families United. Their session began on Sunday evening but I decided to arrive early to check out the latest anti-war protest.

Well, it was a flop, an undeniable flop. First, max 3000 protesters. Second, I heard (cannot prove) that ANSWER was paying people $20 to carry a sign in the march. Third, as late as Friday, ANSWER was petitioning for protesters to march, participate in a pathetic "die in," and read the names of American's fallen heroes.

We walked along side the marchers on Pennsylvania Avenue. The usual anti-___ crowd marched: left-over 1960's hippies; the current version of copy cats; Palestinians; Iranians; and a plethora of various ad-hoc, anti ____ groups. Protesters cannot handle challenges and facts. They have their arguments but when countered, they cut and run. (Note the plastic water bottle in the protester's hands below.) 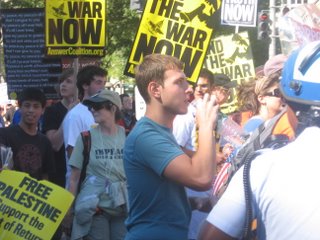 The walk was about a mile. When we arrived at the Capitol, the protesters were already leaving - they were too tired to stay for the rally. Once the "die-in" started, more left. Other than about 150 taunting the police, the few remaining were on the Capitol grounds playing simple games; one group, an upgraded version of "patty-cake" because they were "tired. They had driven from Ohio the night before and ," well, you know, they were tired. Excuse me - I drove the Ohio-DC route for years - max time? 6-8 hours. When asked "What about our guys in Iraq who are up 36 hours straight in 120 degree hear?" This inconvenient fact was ignored by the protester who was also an event organizer. I said, "You must be disappointed in this turn-out. There's no one here." He was not pleased but had no response. 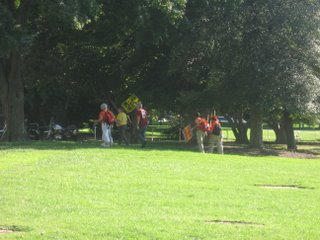 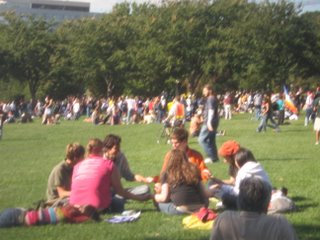 The "die in" crew climbed a 3' wall at the base of the Capitol, "fell" into the arms of the Capitol police, were hand-cuffed and carted off to the local DC jail. I heard no reading of names. Many of the "die-in" participants appeared to think it was cool to be arrested. I'm sure they thought they would be released. However, if a person is arrested and has an address 50 miles outside of DC, he/she must remain in jail until bail could be posted on a weekday. Since they were arrested on a Saturday, they could not be released until Monday. One poor youth called his mom in New Jersey to bail him out; she immediately drove to DC only to discover that she had to wait until Monday to post bail. So, her little darling spent about 36 hours in the local jail along with all the usual weekend arrestees. I doubt it was a pleasant 36 hours.

The Capitol police should be commended for their professionalism and performance. They remained cool under a lot of taunting. They simply took the protesters one by one as they "died" and walked them through the process.

This demonstration, after much hype, simply had no traction, none, zero. Bush has nothing to worry about here - Congress, yes; protesters, no. For the entire parade route and at the Capitol, people turned out to show their support and appreciation for those who serve in our military forces. 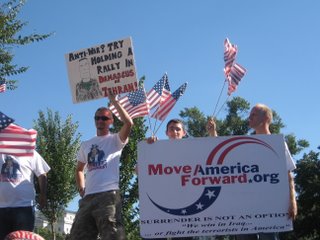 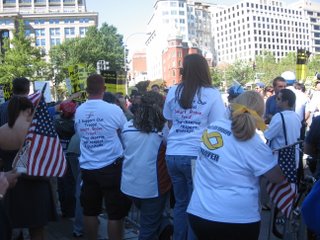