One reluctant cheer for Pinochet

The death of Augusto Pinochet coincides with my use of the Commanding Heights video series from PBS, in which the use of free market economics in Chile is contrasted with Pinochet's often-brutal rule. The WSJ editorial cites on 3,197, but Rudy Rummel's statistics on government-sponsored mass murders put the number reasonably closer to 10,000. That the Chilean government today chooses not to give Pinochet a state funeral is quite reasonable.

That does not takeThe video portions of the second episode -- see Chapters 6 and 7 from this page for the videos -- portray a view of Pinochet that many of the left will find far too flattering.

What is important to remember about Pinochet's commitment to "the Chicago Boys" is that it was an arranged marriage, an almost shotgun marriage like that embraced (sorta) by many transition economies getting caught in very high inflation 15-20 years later. He did not come to power to fix the economy, but fixing it became an imperative.

JAVIER VIAL, President, Association of Banks, 1973: I think that Pinochet's plan was basically the plan to manage an army. He didn't have an economic policy to manage a country.

ARNOLD HARBERGER, Professor Emeritus, University of Chicago: After a year, year and half of military government, you still had 20 percent per-month built-in inflation that wouldn't go away until something structurally changed.

NARRATOR: One of those who plotted the coup went to talk to Pinochet face to face.

ROBERTO KELLY, Junta Economic Planner: I told him, "You've been called Chile's savior, but you will go down in history as the man that buried Chile." He was very shocked by this, and he said, "Okay, you've got 48 hours to come up with a national plan to fix the economy."

ARNOLD HARBERGER: The only people who had a serious blueprint of how to get out of this were this group called the Chicago Boys. 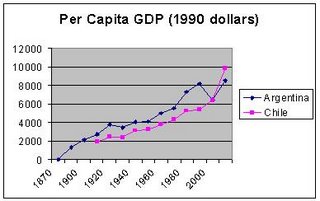 That Chile led the way for most of these countries to abandon monopoly capitalism for a free market seems lost on most people. The contrast to Argentina -- a country much more developed, one that seemed poised for takeoff before the end of the first globalization era in 1914 -- could not be more striking. There cannot be any doubt that Pinochet was a brutal guy, with millions detained during the coup -- but there is a higher standard of living there today, while Argentina continues to go sideways.