What to make of the jobs report?

It depends on what you read. If you read the news reports, you'd think things were in bad shape.

"I think the number was surprisingly low," says Roy Krause, CEO of staffing company Spherion, "but our business has been pretty stable. "We're seeing employment expand at a moderate rate rather than the explosive growth you see during boom-bust periods."
..."This pace of jobs growth is consistent with a soft landing for the economy with second-half growth in the range of 3 percent," writes University of Maryland business Prof. Peter Morici in an analytical note.

But the part of the report that is most remarkable, but if mentioned at all only as an afterthought, is that the Current Employment Survey employment number has been adjusted upward by 0.6% or 810,000 jobs.

Each year, the Current Employment Statistics (CES) survey data are benchmarked to comprehensive counts of employment for the month of March derived from state unemployment insurance (UI) tax records that nearly all employers are required to file. For national CES series, the annual benchmark revisions over the last 10 years have averaged plus or minus two-tenths of one percent. The preliminary estimate of the benchmark revision for March 2006 is +810,000 (0.6 percent).

We don't apparently have yet the entire run of data to observe yet, so I think that this graph from Calculated Risk showing growth of employment over the 2nd Bush administration (with its promise of 6 to 10 million jobs created in the second term) will need an upward revision. 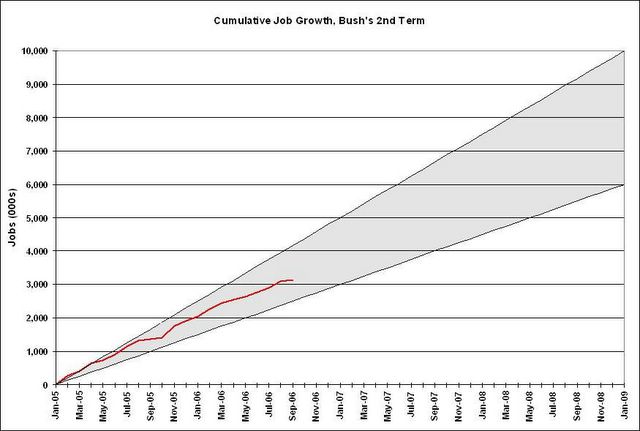 While I don't necessarily agree with Russ Roberts that the payroll survey has somehow caught up with the household survey, a revision that large would indicate that inflationary concerns are still a real possibilty. Concerns that job losses are concentrated in tough swing districts in the industrial Mideast may be overblown.