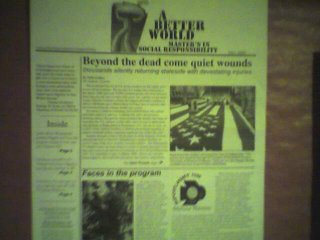 It is spring break week here at SCSU, and as I was strolling down the hallways of our building I see more and more evidence that there's no embarassment in confusing the mission of education with political activism. The newspaper to the left here is listed as the product of our master's in social responsibility program (their grad student office is just around the corner from my department.) Titling their newsletter "A Better World", the lead article in this issue is "Beyond the dead come quiet wounds: Thousands silently returning stateside with devastating injuries." The article contains the empty metaphors we have seen in so many other places, such as "These are people who never expected to pull duty on the front lines in a war zone," as if they were all dupes when signing up for the Guard or Reserves, and "The lack of a citizen response to the mounting casualties defiese a single explanation," (oh? try Soldiers' Angels.) Below it, "Faces in the program," with a story of a student activist with an undergraduate degree in sociology which prepared her for ... the masters program. Now, she says, she can continue to work on producing the Vagina Monologues and pay equity bake sales (not to be confused with affirmative action bake sales -- that kind of discernment is what you get the masters for!) A story of a graduate who has become a residence director at a school out east talks about her creating a recycling program and a symposium on globalization. I sincerely doubt from her description that any serious discussion of economics will occur. 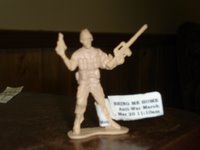 Last week, as I was walking out of my building to the student union for lunch, this earnest young woman comes up and hands me this cute toy soldier, advertising an anti-war march to "Bring Me Home." I reacted to her cheerily, probably out of nostalgia. We had kids like that in high school (Vietnam ended before I got to college.) But I do have to wonder about the simplicity of this discussion, when the signs around her say the march is to mark "the third anniversary of the U.S. invasion of Iraq." I know a guy who has a great speech that could be used to provide some balance to this event. I had to harsh the nice young lady's mellow, but did anyone think to invite him?

Nah, that wouldn't be socially responsible.