I'm sure this is just so we can practice our Spanish 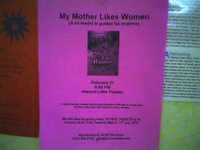 Before there was Brokeback Mountain, there was "My Mother Likes Women". And it was shown on campus thanks to GLBT Services, a part of our Student Life program. Student activity fee dollars at work.

It doesn't appear to be that great a movie (I missed this ad before the showing) if you go by the reviews. The university has had a very good international film series each year, and you'd think a good Argentine film would get attention there. And they have shown at least two Almodovar films in it, which frankly are the worst films I've seen in that series. (I really don't like that guy.) It is interesting to me that a movie that critics who like the movie tend to say "isn't about lesbianism" is being shown by the GLBT office.