Belarus tries to jumpstart a revolution 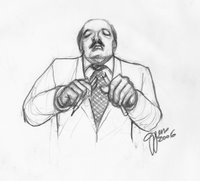 After the results of the Belarussian election were announced, with president-for-ever Alexander Lukashenka winning 82% of the vote that the OSCE has said was fraudulent, opposition leaders are trying to set up a tent city in the central square of Minsk, the capital. Fifteen tents are reported to be set up as they attempt to mimic the other color revolutions in the region. The police have made moves on the group, but so far it's not clear they are going to do more than test the protestors and wait them out.

One line of attack on Lukashenka has been to publish far and wide cartoons like this one which are of course forbidden to be shown in Belarus. The website svoboden.org has many others, and those wishing to free Belarus from Europe's last dictator are invited to post these around their blogs or websites (though maybe not at Century College.)

It will be imperative over the next few days that Belarussians come forward to the square and swell the ranks of the anti-government protest, which currently peaks at early evening around 10,000 and falls to 1,500 overnight. Maybe it will help that the Russians have decided the elections were free and fair; they did that twice in Ukraine for Viktor Yanukovych, who eventually lost.

Good updates coming out of Minsk through some LiveJournal entries; take a look at Russian Mushroom FMI. UPDATE: Good photos from October Square (h/t: the ever reliable Neeka's Backlog.)