At the wall, gone

Your image of Kirby Puckett, if it's like mine, involves the call from Herb Carneal "it's far, it's deep, at the wall ... HE CAUGHT IT!!!" We take those for granted nowadays as part of the Web Gems on Baseball Tonight, but the guy who made it famous, almost routine, was Kirby. 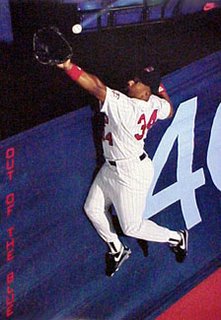 I was commenting to a colleague earlier today that the well of support for Kirby was amazing here. This is not the most forgiving place for people who fall from grace (anyone seen Tommy Kramer lately?) and Puckett had his share of legal and personal issues. Not a word of this came up in any coverage I heard today as Kirby approached death.

This is something rather unique to the baseball player, who has time during the game to express the joy of the game. Shots of the bench in a basketball game are boring; football benches seem to be preening zones; only in baseball is there sometimes (too seldom!) a spontaneous joy of players who are enjoying a win in game 74 of a 162 game schedule that has months still to run. Whenever you watched the Twins of the 80s and 90s and you saw that spontaneous laughter, it seemed, Kirby was in the middle of it. And it was shared by an entire generation of Twins fans. Just like John Gordon's home run call, he touched us all.

That sense of loss, not just of a player but of a feeling, a feeling of uncontrolled joy, will go on here for a few days not just for Twins fans but anyone who loved to watch Puckett play. And how could you not? In a sport that gives hope to us bad body types, he was the ultimate hero, the roly poly guy who could not only crack a double off the baggie but almost inexplicably leap up to bring back the opponent's home run.

And then the grass will turn green, and we'll head back to the Metrodome, and BBTN will be on every night with scores and Touch 'Em Alls and Web Gems, and eventually we'll go back to just enjoying the game. That will be in fact the most fitting tribute to Kirby. He loved the game, and it loved him.

UPDATE: Saw John's post; the pitcher was Charlie Liebrandt, a very good pitcher who had the misfortune of throwing one of the games most memorable home runs. One of my first publications in the local paper was an op-ed on the following season's labor troubles -- seemed an annual event at the time -- in which my closing sentence was to ask whether there was any amount of money that could compensate Liebrandt for the lifetime memories of that pitch.

By the way, I disagree with Rocketman's statement that you had to be a Twins fan to appreciate him. I watched him beat my Red Sox, answering a top-of-the-ninth rally by Boston that tied the game with a winning double. The big smile out on second was so infectious I couldn't help but smile myself.

UPDATE 2: I'll stand by my statement, Liz: He wasn't the greatest player of his time (check Win Shares, or this from Baseball Prospectus in 2000 when he first was eligible for the Hall), but he was the heartbeat of two world champions.