Which way to Harare?

I find hyperinflations fascinating. I collect currency from them. I research their central bank histories. I try to visit countries that have had them recently.

The governor of Zimbabwe's reserve bank last week admitted that his country is in the grip of hyperinflation, with some economists predicting an inflation rate of 1,000% within two months.

This week saw the introduction of a so-called "bearer cheque" worth 50,000 Zimbabwean dollars - 50 times the highest available banknote - but actually worth around half a US dollar and only enough to buy a loaf of bread.

It's part of a pattern with hyperinflations, to introduce new currencies with higher denominations. It isn't much of a currency to look at, but I'll have to grab one of these: 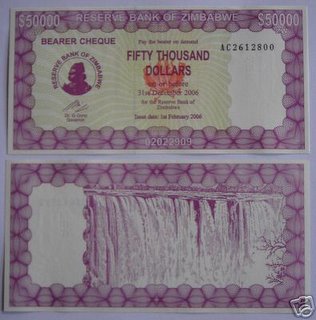 Looking at the Reserve Bank of Zimbabwe we can see that money supply is growing more than 400% per year. If prices are heading to 1000% inflation (and inflation was 613% year-on-year to January 2006) the Zim-$ is going out of circulation. While looking for material I saw this interesting article of someone going golfing in Zimbabwe a few years ago. He talks about how the US$ was king even in 2001:

It was a bit painful to realize that the 2,500 Zim I had withdrawn from the bank a few days earlier had cost me about $40. At 120/1 I got 4,800 Zim for $40 � and I hadn�t even bargained. Over the next few days the rate increased daily. From 120/1 to 130/1 and then to 135/1. In a country gripped by hyperinflation the strategy is always to exchange on the curb (counting the money carefully to look for counterfeit bills) and pay in local currency. Two bedroom cottages in the municipal campsite cost $7US per person � or 350 Zim. It doesn�t take long to do that math, at the curb rate you are actually paying only $3!

And the exchange rate now is about 100,000/1! That pictured bill, worth 50 cents on the street right now, is selling for about $3.75. (Three pieces of the common currency in much smaller denominations would probably cost $1.) The country has used these bearer cheques in the past, but the highest one before was Z$20,000.

One thing worth pointing out here: Countries with hyperinflation seldom reform without a major change in government. Those who hope Zimbabwe can be delivered from the misrule of Robert Mugabe should take heart as the inflation begins to spiral upward.